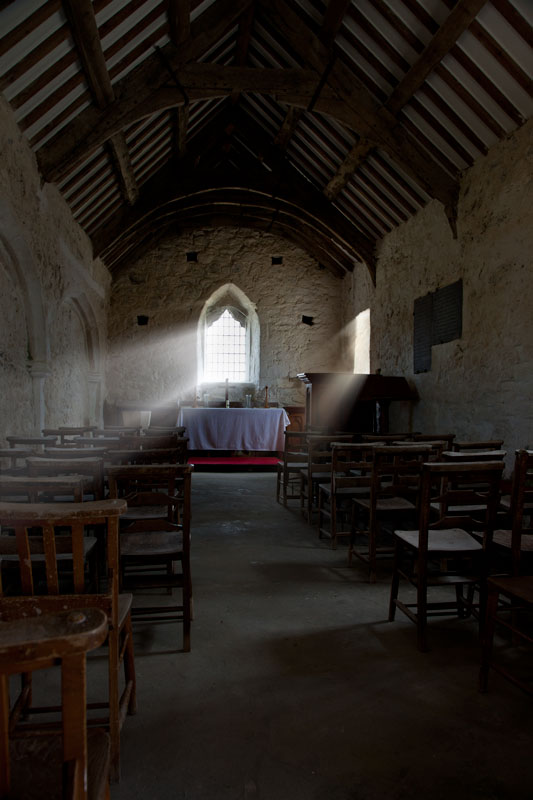 Abberfraw Church In The sea

Don’t ask me how or why but this shot appears to have a shadow in it within the pulpit at Abberfraw Church in the sea, Anglesey. It wasn’t on the ones before or after, the only difference being that for this shot I was kneeling…how bizzare!!

I leave that with you.

have a great weekend 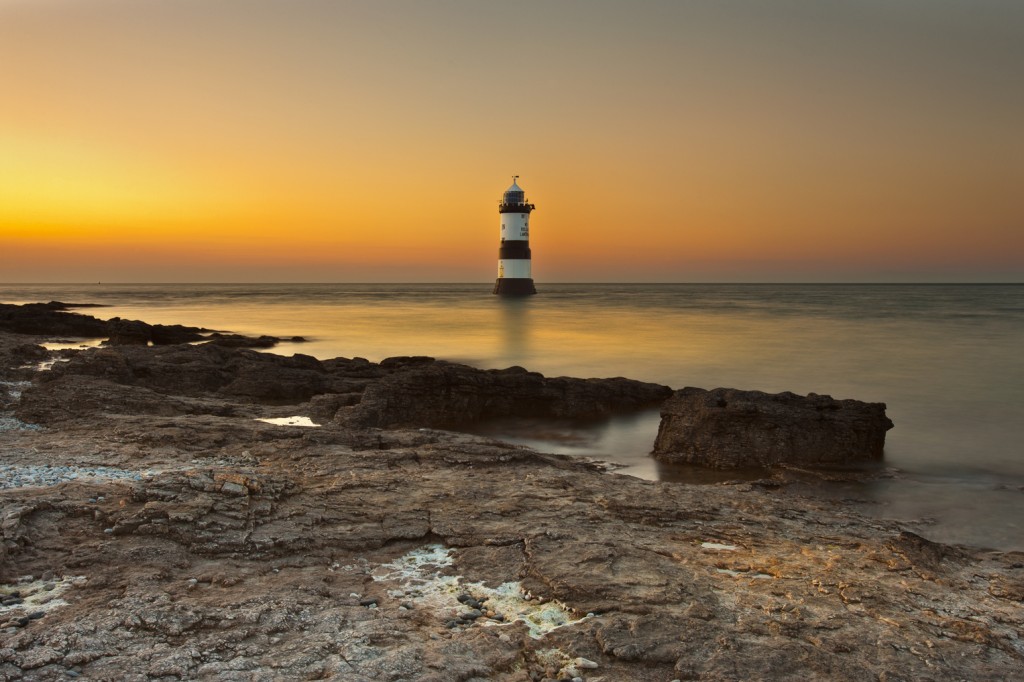 this will be my last from Penmon for this season, I have to get back to The Peaks starting next week for my heather collection plus I will be producing my Wales 2011 Pictures to Music vid and a couple of commissions so this will take up most of the next week or two.

I would like to thank those who have bought from my site lately the Penmon series has proved to be a winner as it were, hopefully this will do likewise and grace a living room wall and bring back wonderful memories of  such a beautiful peaceful place for someone.

The lighthouse at Penmon Point was built after the tragic disaster of the steam ship Rothesay Castle in 1831. When a day trip from Liverpool turned to tragedy with the loss of passengers and crew, it was decided that a lighthouse and accompanying Lifeboat Station was needed. Today, the lighthouse watches over the treacherous waters between Penmon Point and Puffin Island

At around midday on August 17, 1831, she left Liverpool carrying 150 passengers. She had been intended to leave at 10 a.m. but was delayed by the weather and the late arrival of a passenger.

On leaving the Mersey estuary, she encountered a strong NNW wind and a rough sea. One of the passengers went to see the captain, a Captain Atkinson, to ask him to return to port, but he found Atkinson drunk and unwilling to consider turning back. By 10 p.m. the ship had still only reached the Great Orme and the ship was found to have two feet of water in the stokehold. The pumps were found not to work, there was not even a bucket available for bailing, and the single lifeboat had a hole in the bottom and had no oars. At around 1 a.m. on August 18 the Rothsay Castle ran aground on Dutchman Bank and after a while broke up, the captain and the two mates being swept to their death when the funnel collapsed. A total of 23 passengers were rescued in the morning.

Bodies were washed up over a wide area of Anglesey and the Welsh mainland. An inquest was held at Beaumaris and the jury concluded:

had the Rothsay Castle been a seaworthy vessel and properly manned, this awful calamity might have been averted. They therefore cannot disguise their indignation at the conduct of those who could place such a vessel on this station …

As a result of this man made disaster, a lifeboatwas established at Penmonon the SE tip of Anglesey in 1832 and a lighthouse built there in 1837.

And with this I’ll leave you and wish you all a great weekend, off to swap out pictures at Barnsley Central Library for my Seascapes

Not So Footloose And Fancy Free 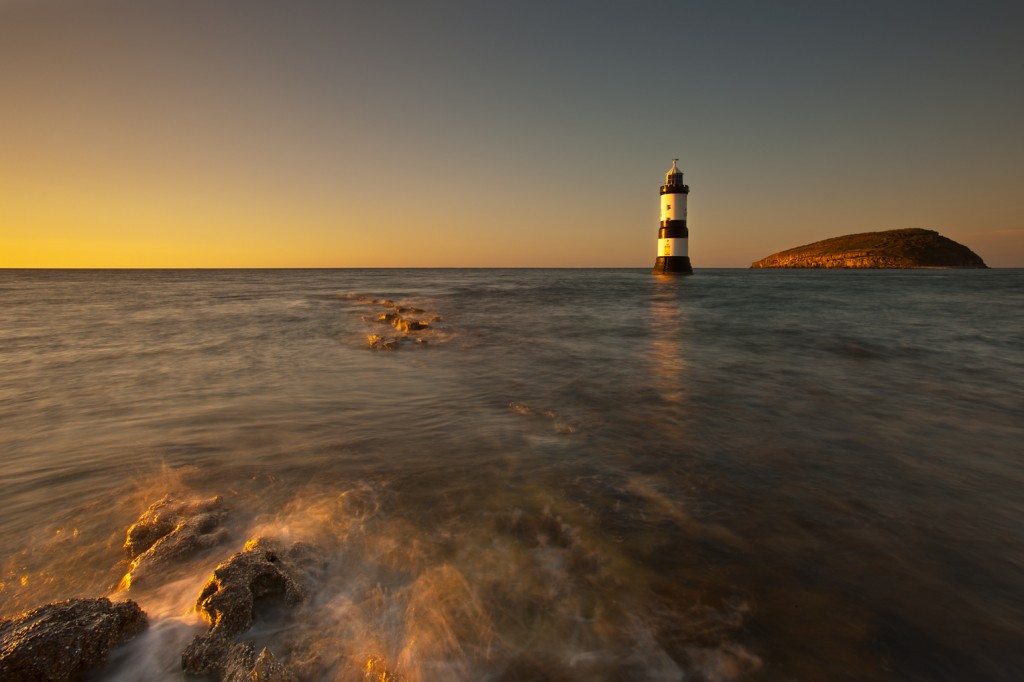 It was a wonderful evening at Penmon and I ventured as far out to the lighthouse as possible, I clambered around fisherman on the slippery rocks and setup at the waters edge, the tide was coming in quite fast but who cares when you’re in a place like this…..

Now I know I bang on about my Muckboot Artic wellies, yes they’re waterproof, yes they’re lined and will do what they should in extreme temperatures, BUT they don’t come with instruction of how to get them out of rocks when you get your foot well and truly lodged in between them and the tide is coming in….FAST!

Took several panicky seconds to wrench my foot out of the rocks grip, at this stage a fisherman pipes up “you were lucky” great I thought at which point were you going to help…none I presume.

I stepped back took a deep breath and this is the shot…the white between the rocks bottom left is where I was stuck, and of course it’s now another lesson learned.

“Dont expect help from fishermen” or something like that cos I’ll always get into scrapes.

Have a great Thursday 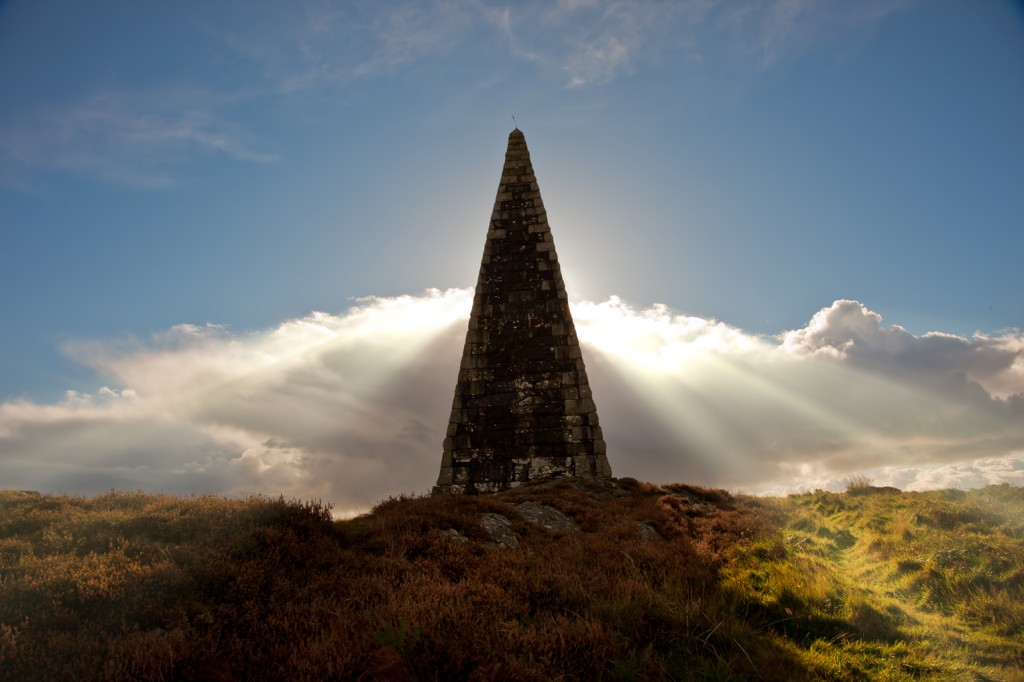 One that didn’t make it onto the sales site due to the blow out white, pity as I really like it, but hey that’s life, tried burning it out but it just not having it, will have to wait for our next trip and have another play.

Shot is Neilson’s Monument near Rinngford, Kirkcudbrightshire. James Beaumont Neilson (June 22, 1792 – January 18, 1865) is a Scottish Inventor whose hot blast process greatly increased the efficiency of smelting iron….so there you are!

Its a lovely walk up from the tackle shop and cafe at the bottom of the walk, but do beware if you have a dog with you there are electric fences everywhere, Stormy got stung with one, she didn’t half let out a yelp.

Anyway this wont get through to sales its just to show the comp and of course I love those rays.

Meeting with other togs later for lunch, should be a good catch up. 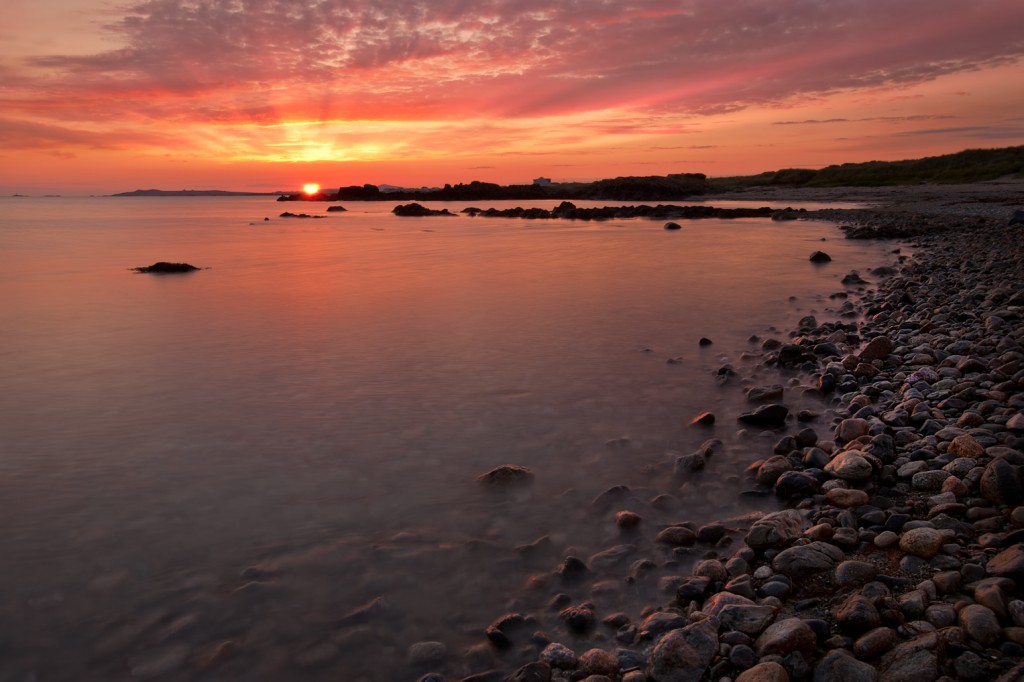 just been to the docs and now need a scan on my head and coccyx of all things..lol talk about being topped and tailed! ooohhh bet its going to hurt! Wussy that I am, or so I am told.

Anyway this little beauty is from a sunset session on good old Anglesey, there are very few decent pebble beaches due to nature of the island’s slate and volcanic structure, but you do get these little gems popping up from time to time especially if you wait for the right conditions. The pebble bank is only 15-20′ wide and catching the sea and the sunset at just the right time has taken me a few seasons now…think I got it ok.

I feel a canvass coming on for the dining room if Jo will let me, few more to process for the vid to music then its back to some local work and hopefully a commission, will tell all later. 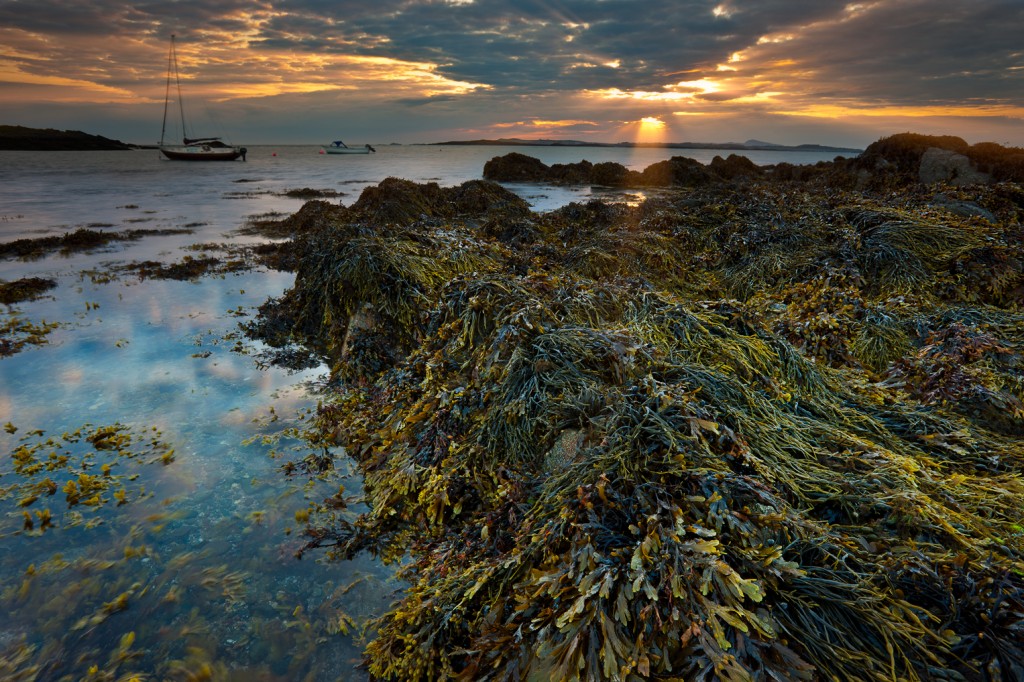 Monday morning again, the weekend goes so fast doesn’t it!.

Just a quick thank you for all the well wishes from people re my accident, my back is still very painful and I have a whopper of a headache permanently but I’m still here so that’s all that matters, time will sort out the pain I’m sure.

Anyway it’s not going to stop me getting on with things, I hope….

I have a thing about seaweed  I love the detail and textures it brings along with the colours, it could be every bit an alien life form blanketing the shoreline and reaching out to sea. It was a calm night but with the foreboding presence of those storm clouds drawing ever nearer…

It never did rain and the clouds gave way to a beautiful salmon pink sky late at night, so glad I stuck around.

Take Only What You Need, And Be On Your Way

Take Only What You Need, And Be On Your Way

The title is from my favourite track and favourite band  “Pendragon” the track being “This green and pleasant land” please check it out , it’s fantastic and from the most underrated UK band I have been fortunate to photograph. The line “Take only what you need and be on your way” sums it all up, the times we live in of greed and possession…..take a good listen to Nick Barrett’s lyrics they don’t half hit home! and of course his guitar work is incredible as usual.

Looking into the image through my viewfinder as I stood in the sea I was listening to song as I setup  the composition and it made me think, yeah this is enough I don’t need anything else, I have it all and believe me this is plenty enough for anyone.

Happy Friday and have a great weekend, off to The Peaks tonight can wait then doing a walk and tog session for the Council tomorrow , hope the weather plays fair. 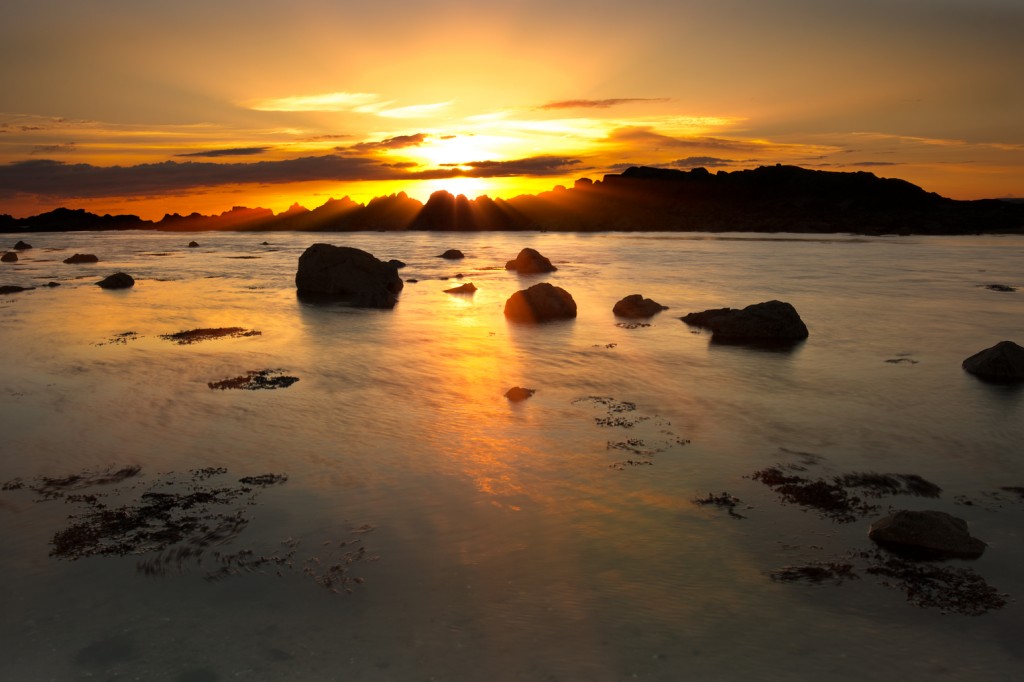 As the title suggests, for me this is the closest to Heaven I can get without Doris Stokes help!

When you get presented with a real golden sunset and feel the sea washing around your legs as the remnants of the days light kisses your cheek goodnight…..ahh, its true I tells you, try it, it really does fill your soul with happiness. You forget bills, problems and who’s done what, all  that matters is you, right now and the fulfilling feeling of inner peace.

You cant buy that with a lottery win

Pebble Beach, “far away in time” 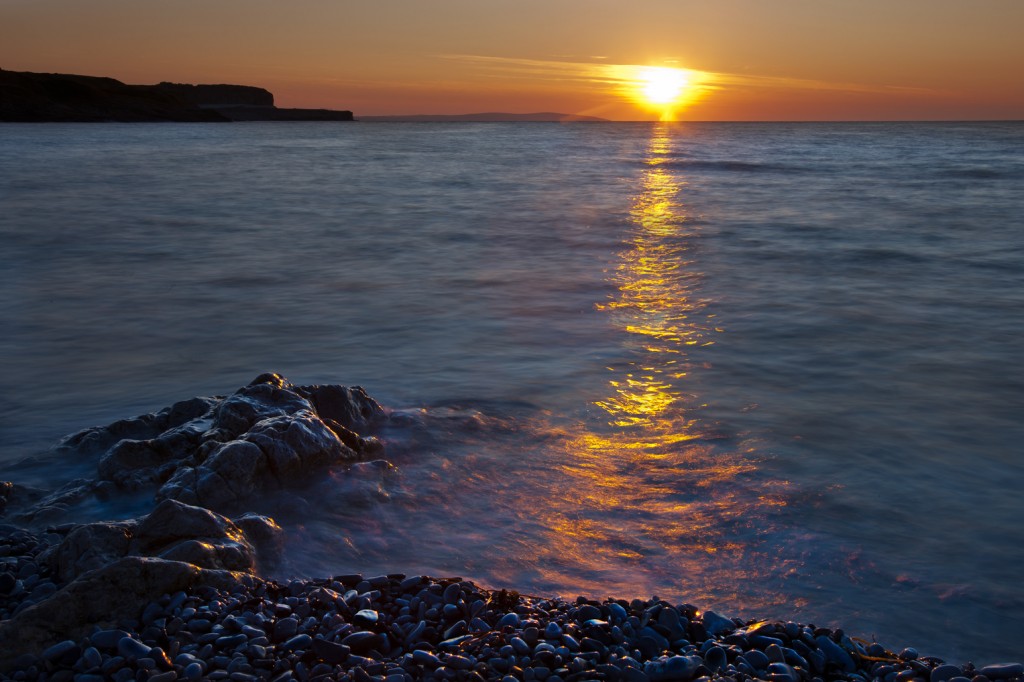 OK so I got you singing “Echoe Beach, far away in time” in your head, it will be there for ages, I’ve had it buzzing round in my head for 2 hours now! it was a good song though.

This shot is from Penmon by the lighthouse, it was a beautiful sunset and the gold from the sun settled into a dip on the pebble beach, tight restrictions on composition here as there were fishermen everywhere, still I think its about right, I love the detail when blown full size.

On another note I’d like to thank Jeep for making a car that can withstand being hit from behind by an arctic lorry. I was coming off the M1 yesterday and was about to pull onto the roundabout when 20+ tons of lorry ran straight into my back end doing some speed.  It’s right what they say about slow motion, things flew everywhere. My car flew in the air and hit the roundabout centre barrier. Anyway, police cars, paramedic, then in an ambulance for an hour (finished up at Barnsley General, last night for check over as by back and neck felt worse) before I decided I dint want the hospital and they let me go, I have whiplash and lower back ache and a doozy of a headache where I nutted the steering wheel  but otherwise unhurt which as the police officer said was a miracle and mostly down to the construction of the car….The bumper and parking assist system has had it, the boot wont close properly and a scratch to the front end, oh and worst of all my Oakley Dispatch glasses flew off my head and are scratched £155 worth, that’s most annoying, they better pay for that!

Police are looking at prosecution for the lorry driver due care etc etc but it was an accident and I’m here so hopefully the pain will wear off soon and the car will be fixed, scary though I thought I had done worse to me at the time but it was shock. The guy came with the police to apologise, he said he nearly bricked it when he saw the size of me..lol not that I could have done anything.

Echoe beach far away in time, damn it , it just wont go from my head! 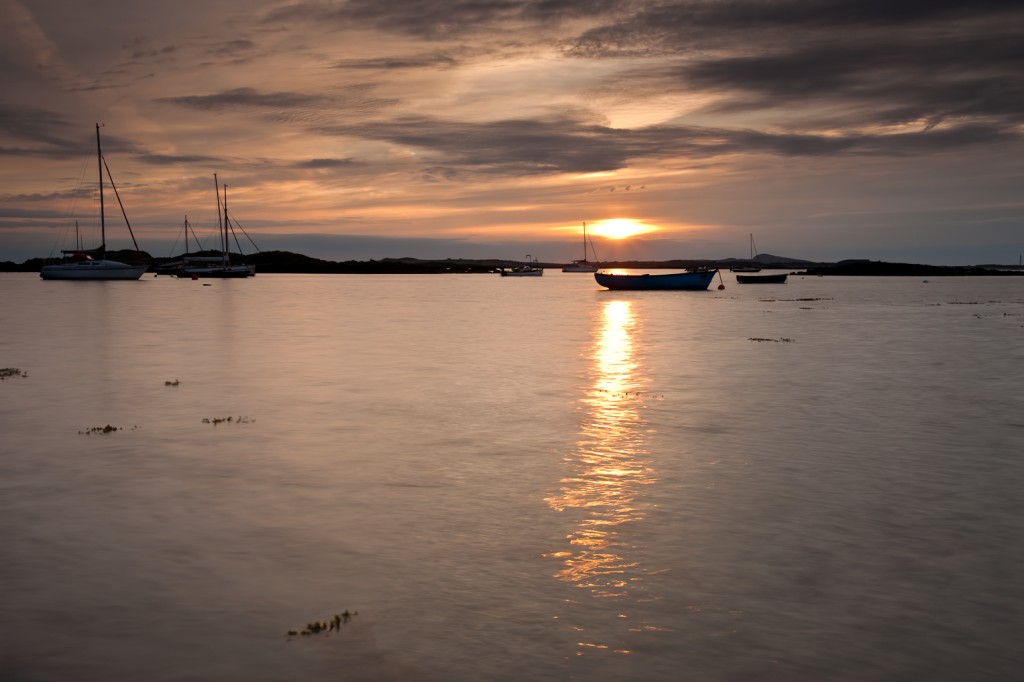 Tongue firmly in cheek re the title,mind you are people old enough to remember The Onedin line from the 70’s, I can just remember it as it ran until 1980 and of course there’s good old “dave” channel…lol.  It was just that I had such a bad headache this night, I’d been in the sun too much during the day and must have some mild sun stroke or something. I gave up on sunbathing  a few years ago realising it’s boring and obviously isn’t doing me any favours plus there are better things to do like jet skiing and playing with Stormy in the sea, unfortunately the sun gets you what ever you are doing and just walking round produced this whopper of a headache.

Anyway the sunset didn’t disappoint and standing knee deep in the sea produced this image of the Boat Pool, an overnight stay over and anchorage point for small yachts and fishing boats

Some lucky people aren’t there?

have a great day