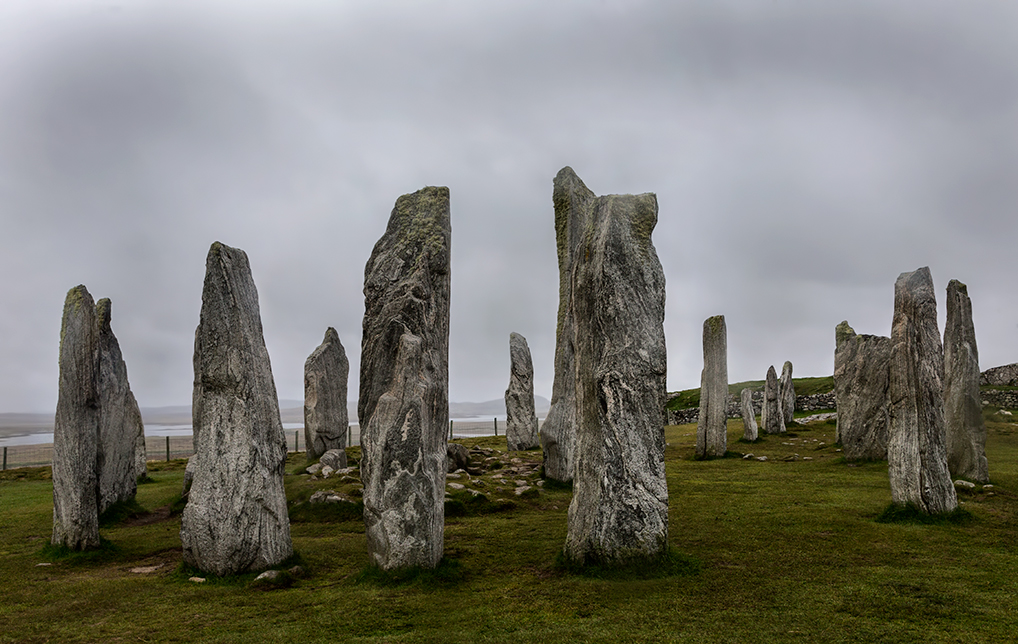 Circles of stone
The main monument is extraordinary – a cross-shaped setting of stones, centred on a circle of tall stones. At its heart stands a solitary monolith 4.8m high. Lines of smaller stones radiate from the circle to east, west and south. From the north runs an avenue 83m long, formed by two lines of stones that narrow as they approach the circle. Within the circle is a chambered tomb.

Numerous other ritual sites lie within a few kilometres. These are mainly more modest rings of standing stones, or single monoliths. The most impressive – Cnoc Ceann a’ Ghàrraidh and Cnoc Fhillibhir Bheag – lie just over a kilometre SE of the main Calanais ring, and originally consisted of rings of stones at least eight in number.

Ancient centre of power
Archaeological excavation in the 1980s proved that the main circle was erected 4,500–5,000 years ago, and the chambered tomb a few generations later. Around 3000 BC the climate in the Western Isles was warmer than it is today and the sea-level lower. Salmon ran in the rivers, deer, sheep and cattle grazed the surrounding hills, and barley grew on the broad ridge where Calanais stands. A cult or religion seems then to have swept through the British Isles, involving the building of large earthen enclosures (henge monuments), and impressive circles of timber or stone.

Astronomical observatory?
Why did our Stone-Age ancestors build Calanais? Our best guess is that it served as a kind of astronomical observatory. Patrick Ashmore, who excavated at Calanais in the early 1980s, writes in his insightful guidebook Calanais: The Standing Stones, published by Historic Scotland in 2002: ‘The most attractive explanation … is that every 18.6 years, the moon skims especially low over the southern hills. It seems to dance along them, like a great god visiting the earth. Knowledge and prediction of this heavenly event gave earthly authority to those who watched the skies.’

Lost and found
Around a thousand years after it was constructed, Calanais was abandoned. The area inside the circle was levelled. This may have been just ordinary agriculture, but it may conceivably have been ritual cleansing, ensuring that no inconvenient ancestors would return! The climate was changing around then too, becoming cooler and wetter. Gradually a blanket of peat covered the site, drawing a veil over the ancient power centre.

Renewed interest in the ancient circles emerged in the 17th century, by which date the people of Lewis were calling the standing stones fir bhrèige (‘false men’). Gradually a more scientific attitude took hold, and in 1885 the main circle was taken into State care.